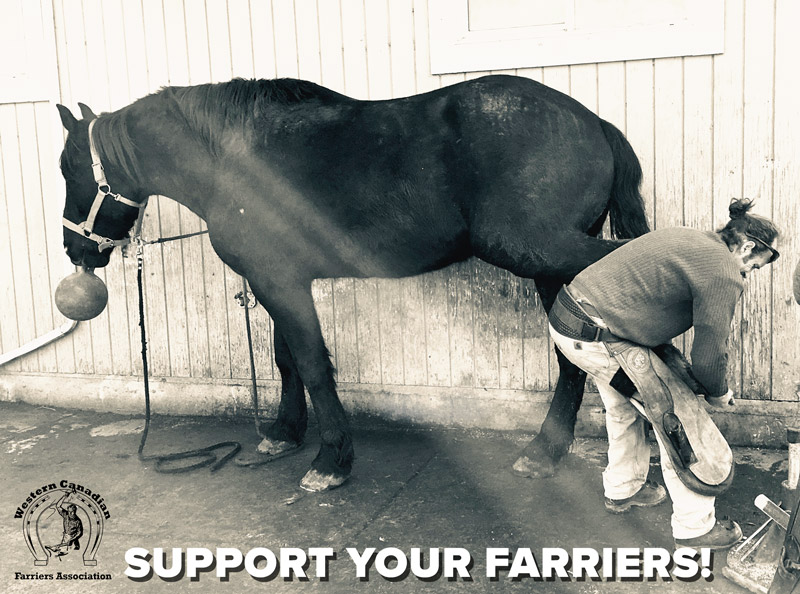 The WCFA and The BC Animal Owners Association is launching a letter writing campaign asking the government to recognize the important role farriers play in equine healthcare. Please ask your clients, friends and family to sign the letter and support our cause.

Hoof care is essential to the health of the horse.  NO hoof, NO horse!

Farriers are knowledgeable in correcting hoof issues and are asking for a legitimate place to practice in BC.

WCFA appreciates your support – the ministry is reviewing the file NOW. Your letter is important!

My Grandpa came to Saskatchewan from Gus Iowa in 1902. He had grown up on a hog farm. He moved to my hometown of Riceton in 1908. He was not a horseman in the sense that we think of it today. The tractor of his farming career was Percheron horses and mules. When I left home I had never seen a horses foot trimmed with its foot off the ground. Grandpa used bull trimmers which were a giant long handled pair of cutting pliers with bevelled head. These were used by trimming off excess usually flared hoof with the foot on the ground.

I often say that by the age of 10 I had learned the wrong way to do everything. This is by and large true, but there were many lessons to be learned just the same. In the 1950’s My Grandfather religiously put waste oil on every cut that occurred. In my very early memory, probably 1953-54, I remember one of our draft horses with a “frozen turkey” cut. That is a horizontal deep cut across the chest, 1-3 feet in length. These were called frozen turkey
cut because they looked so big that you could throw a frozen turkey in the hole and lose the turkey.

Billy Mitten, the trainer who had taken “Duke” the stallion to the Toronto royal fair and won many awards, said to put waste oil the cut. Billy “knew everything” so Grandpa did. Grandpa was diligent and the cut over time healed beautifully. In Grandpa’s mind this validated the use of waste oil on all cuts.

What Grandpa didn’t know, and many people today don’t know is that “frozen turkey” cuts will heal beautifully in spite of us rather than because of our treatment efforts no matter what they are. Cuts in this location and on the arms and gaskins are best allowed to heal unmolested and do beautifully.

As an aside you may recall advertisements in horse magazines extolling the virtues of wound remedies and showing a series of pictures to “prove” it. What these ads missed is that left alone wounds in these locations do just as well. The important veterinary issue when a horse is cut is to be sure the tetanus vaccination is current. There are of course many body locations that require very specific and diligent treatment.

One very prominent old-timer in the Fraser valley says quite correctly that frozen turkey cuts should be treated by turning out in the pasture the farthest from the house so no one will see it and it will heal with little or no mark.

The story above shows that even before “DR Google” misinformation and blatant falsehoodsvwere part of the world of veterinary medicine, but there were and are still lessons to be learned from it.

We welcome the opportunity to participate in this forum as we embark into strengthening the relationships between farriers and veterinarians. Different to North America, most veterinary schools in Europe enjoy a podiatry Department, staffed with competent farriers who teach veterinary students the principles of the art of horse shoeing. Education of the history of veterinary medicine is important as it helps us understand where we come from and how we got here. Veterinarians and farriers have common origins and have shared a common path longer than not.

Veterinary medicine from its origins was intimately linked to foot care. In ancient Greece, the practice of medicine had its roots in mythology and wizardry (which by the way we still experience today!) and veterinary and human medicine were often performed by the same individuals. Every God needed a doctor to cure its wounds and ailments. The legendary centaur (half horse, half man) Chiron, initiated comparative medicine and had famous and accomplished disciples. Chiron gives origin to the words ?chirurgie? and ?surgery?. Apollo was the God of health and disease and his son Aesculap (Paton and Martin logo?s meaning) was educated by Chiron and became one of the most famous surgeons and doctors.

Later on Aristotle, described laminitis, tetanus, colic and many other ailments. But it was not until the Romans, that the word ?veterinarium? was used to describe those who took care of the working animals, feet included! For a long time in the Roman Empire, veterinarians had social ?immunity? due to their importance and their main role was to serve the army and agriculture.

During this time, the care of horse?s feet was considered an important task as they identified the importance of horses in transportation and war. While in ancient Greece, veterinary medicine was rather linked to human medicine, during the Roman Empire, the veterinarian was rather associated with agriculture. As civilizations progressed, the role of the horse not only as a transport animal but importantly as an instrument of war, raised its status, and so did the status of veterinarians. During the Bizantine empire, veterinary medicine experienced great progress, but it was really during the Arab empire in the Iberian (today Spain and Portugal) peninsula, that veterinary medicine underwent its greatest advances. This was arguably due to the reverence that Arab culture had for the horse (and still does!). During this time, veterinarians and farriers continued to blend in. Foot care was a fundamental task of ?alb?itares?, Spanish word derived of Arabic used to designate veterinarians.

There are very important veterinary textbooks that derive from this time, and it was Ibn Jakoub in 695 a.c. that wrote the main book on equitation and farriery. Another writer, Abon Zakaria, wrote the first lameness treaty. The advances of veterinary medicine, including the art of farriery, were disseminated through Spain and Europe, until the arab empire abandoned the European continent. For a while veterinary medicine in Spain was the most advanced of all due to the arab influence which quickly spread north of the Pyrenees. Spanish equine ?alb?itares? (veterinarians) travelled to the Americas and brought their knowledge through the writings of Juan Su?rez de Peralta in 1580. The first Veterinary School in the Americas was founded in Mexico in 1853 and the rest?is history.

Partly because of this history, and throughout my veterinary education in Spain and my dad?s (also a veterinarian) teachings I have come to greatly respect the work that farriers do as an integral part of what I do as a veterinarian and surgery specialist. As an example, I can recall while I was in Glasgow, finishing my degree and doing an internship at the University?s Equine Hospital, I was exposed to the wonderful work of the Ferrie brothers, world renowned farriers and several-time world champions. Alan and Jim would come every Tuesday to our equine
hospital to shoe horses in need of some regular or therapeutic shoes. As an intern I had the job of bringing horses to them, hold them, jog them or whatever was needed, but most importantly I had the job of listening and learning from them and from my mentor, Dr. Graham Munroe. One cannot remember all the details of every single case and a few anecdotes remain. But what has stayed with me throughout the years is the superb team that veterinarians and farriers can form by staying humble, open to ideas and collaboration and sharing experiences with each other. The main winner is none other than the horse, which at the end of the day is what really matters. This is why I welcome very much the opportunity to contribute to the effort of the WCFA to build bridges between veterinarians and farriers in BC. I do not know much, but what I know I hope it is of use.